My kids are four and one and they just got their first stockings. Pitiful, I know. We just never got around to it, and the four year old didn't know any better until this year. So we got away with it for a little while. :) 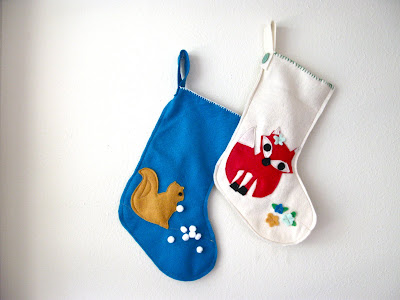 This cutie set of woodland creature stockings was a team effort from my husband and me. He did that lovely whip stitch you see around the top edge - pretty, huh? I did everything else. I don't say that with disdain. You must know, I almost loathe stitching things by hand, but sincerely appreciate the craft. Anyone who does it gets a dozen extra points in my book.
Fox & Squirrel is a sweet, close to home theme. My son has always had a set of "silly words" he has kept in his vocabulary since he began talking. For a while it was "no-nee, non-ee" and he would never tell us what it meant. So my husband made up a bedtime story a few years ago with a fox and a squirrel and little message the wind tells the fox, and the fox passed it along to the squirrel, and the squirrel passed to a little boy named Judah...you can guess the message: "no-nee, non-nee". Anyhow. Fox & Squirrel quickly became a bedtime favorite and still gets told around here at night.
We thought it was only appropriate to appoint each character to a stocking. My son is the squirrel - who is also eating snow the way Judah loves to do. And it was obvious who the mischievous little fox would be....I love my wild child girl! :) 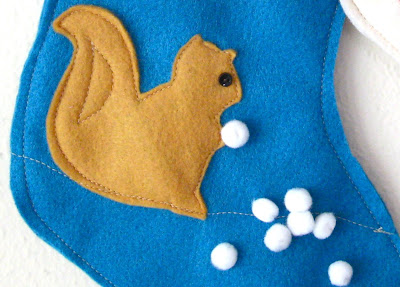 i love them! seriously, corrie, judah and ruthie are going to treasure those! my mom handmade stockings for me and my sister when she was pregnant with me, and we still use them today...they're so precious, especially knowing how much she hates hand-stitching too!

I am very happy to keep track the thing that I used to do. many thanks for sharing. impressive page indeed.

They are really pretty. How did you learn to make such beautiful crafts? They are works of art and I would treasure them forever. Really cool!