We have pretty much settled into the new place so I thought I'd offer a grand tour. Then I realized how many fun/interesting/nostalgic tidbits there were to share about each photo, so I'm breaking it down so as not to overwhelm/bore you. Everything we own is a hand-me-down, handmade, or has some sort of story to tell.
Photo No. 1 - The Foyer
See that cool piece of furniture on the left? That is a dental piece from my husbands side of the family. My mother-in-law inherited three of those and gave one to each of the kids. It's the real deal. Her uncle was a dentist from around 1930-1960(ish) and when we cleaned out the drawers it looked like it was frozen in time. Each little compartment still had drill bits, crown molds, matrix bands, glass medicine jars with who-knows-what in them. One drawer still has a tooth in it!
My mother-in-law also passed down that little table in the corner - one she repainted a while back. And the picture you can't see very well on the wall is a collage of all the men and women on my husbands side of the family who have served in the military ever since the civil war. My husband's grandfather made it. 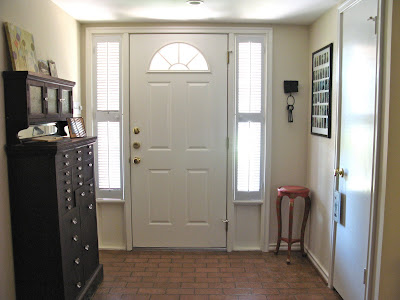 Photo No. 2 - The Dining Room
The table was a gift from my husband for our fourth anniversary. He built it from salvaged fence wood. The green chairs were, um, accidentally stolen from a crosswalk attendant. We thought they were trash and didn't have the nerve to return them once we discovered that the crossing guards sat in them while they waited for the kids. The wooden chairs are ill-proportioned and will tip you out if you aren't careful. They were made by our old crazy landlord in Louisiana.
The big beautiful buffet is newly inherited. It is one of my favorite things in the house. It was built in New Orleans, and has been in my mother-in-law's family since she can remember. I scrounged around and found one of my old skeleton keys that actually work on the locks! 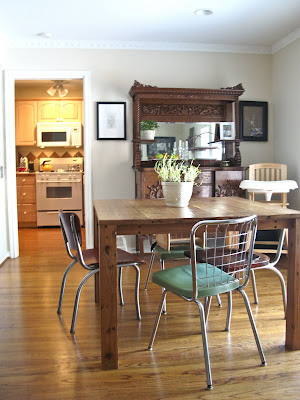 Photo No. 3 - Built-in Bookshelves!
We love family photos, love books, and love art...so you can see why this is another one of my favorite spots in the house. That set of books at the bottom left was passed down from my dad to my husband. The letters that spell "Books" in front get rearrange by the four year old to say "Bokos". Recognize that car at the top right? There are pieces of my husbands pottery sprinkled around, and paintings done by both of us. The tiny picture on the third shelf down on the left was a gift from my dad from Russia - a snowy scene painted on birch wood. The cigar boxes on the middle shelf hold my collection of morning post-its. 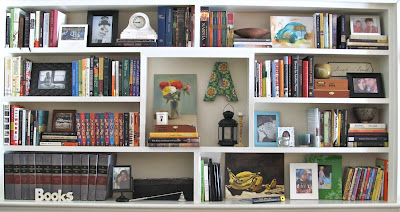 Photo No. 4 - Back Kitchen Door
I have had to fight for that window pane. Every time we move, my husband tries to get rid of it! This time though, it was his genius idea to put hooks on it and use it as a bag "catch-all" by the back door. Why hadn't I thought of that sooner?
The bench was built by my husband's grandfather a long time ago. 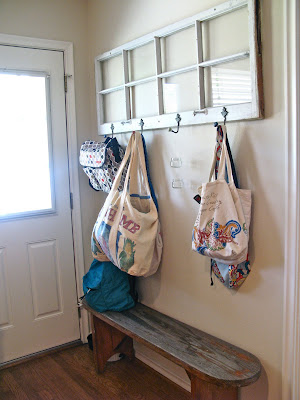 gorgeous! i love it all! you've got such a great style. :)

lovely! You have such great taste and are quite the lucky duck to have all those beautiful pieces pasts down to you. LOVE THAT TABLE! My hubby is a self taught carpenter. He's made a planting table and a work bench out of scrap wood. I have requested his/her desks...I am looking forward to when he has the time...

I also just moved. Congrats on getting everything organized already!

fabulous tour...so much history to all your things...I especially LOVE the military photo idea ;o)