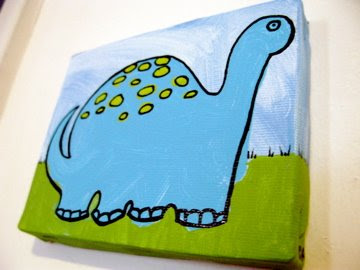 Sir Stomps-a-lot was made with the left over paint from Mrs. Poppy. I can't stand to waste paint. Not to mention, my little guy is taking after his daddy and developing a deep infatuation with dinosaurs. It started with these shoes. He won't wear anything else. Seriously. I've checked his other shoes for needles or something because he cries so hard when I try to mix up his footwear. Mimi bought the exact same shoes (the next size up) so hopefully we'll make it another six months before we break the news to him that they don't make them for teenagers.